In Oslo all public transport belongs to Ruter. Ruter ticket allows you to take any kind of transport for the same price. Ticket itself could be a paper card or an e-ticket.

The city and surrounds are divided into zones. Nowadays (in 2016) a ticket for the 1st zone costs 32 NOK (other zones are more expensive). Having bought the ticket you can use it in any kind of transport (within the zone), so you can take bus, metro, tramway, train or even boat.

All the tickets have to be activated before the start of the trip in special terminal. And if you went on bus (tramway, metro) having unactivated ticket, then it’s violation of rules, and ticket-controller will give you a fine around 1000 NOK. By the way, there are ticket-controllers even in metro, and yeah, the fine is pretty significant.

For example, terminals at buses look like this one: 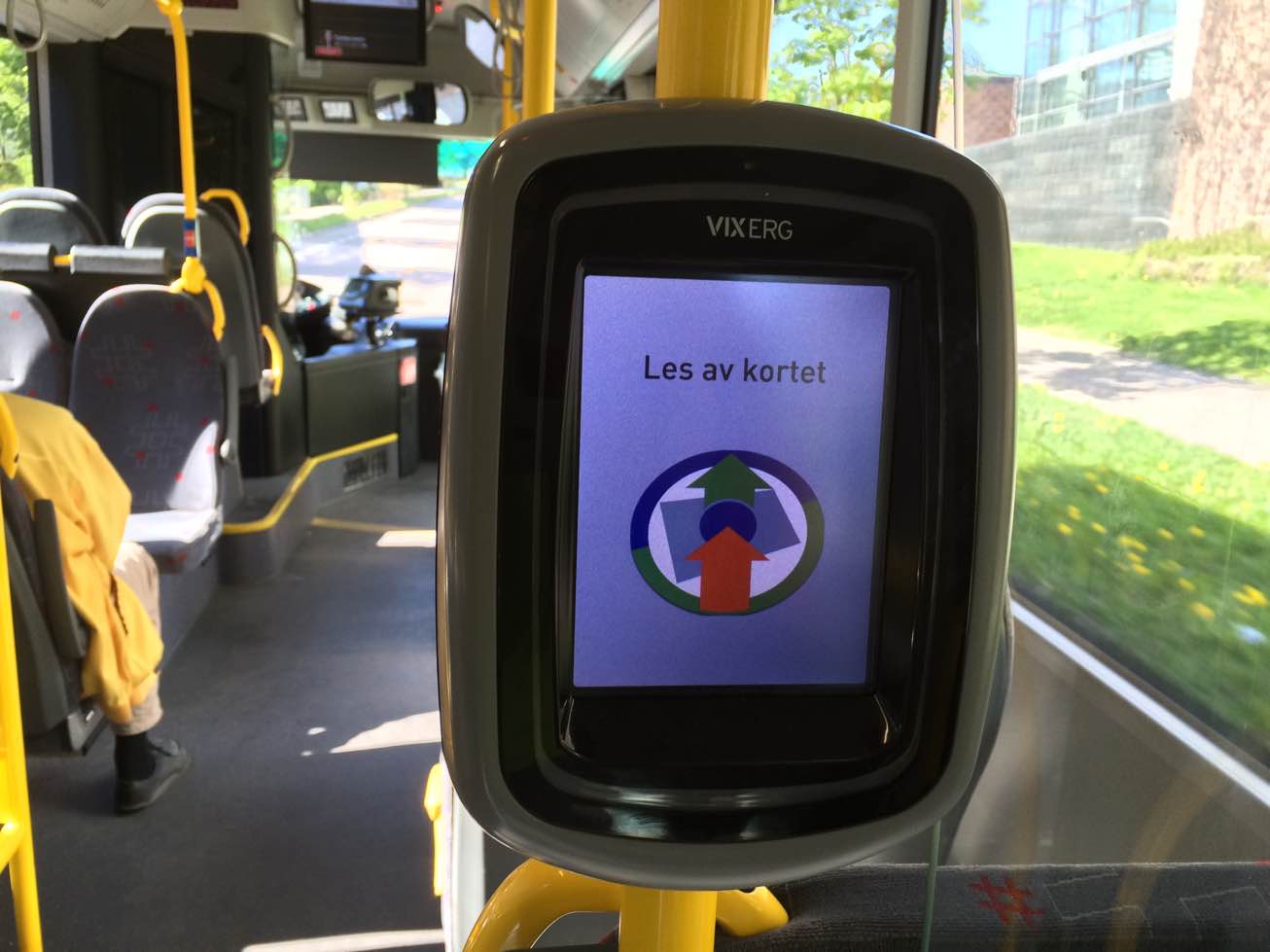 And that’s what it shows after you scan your ticket: 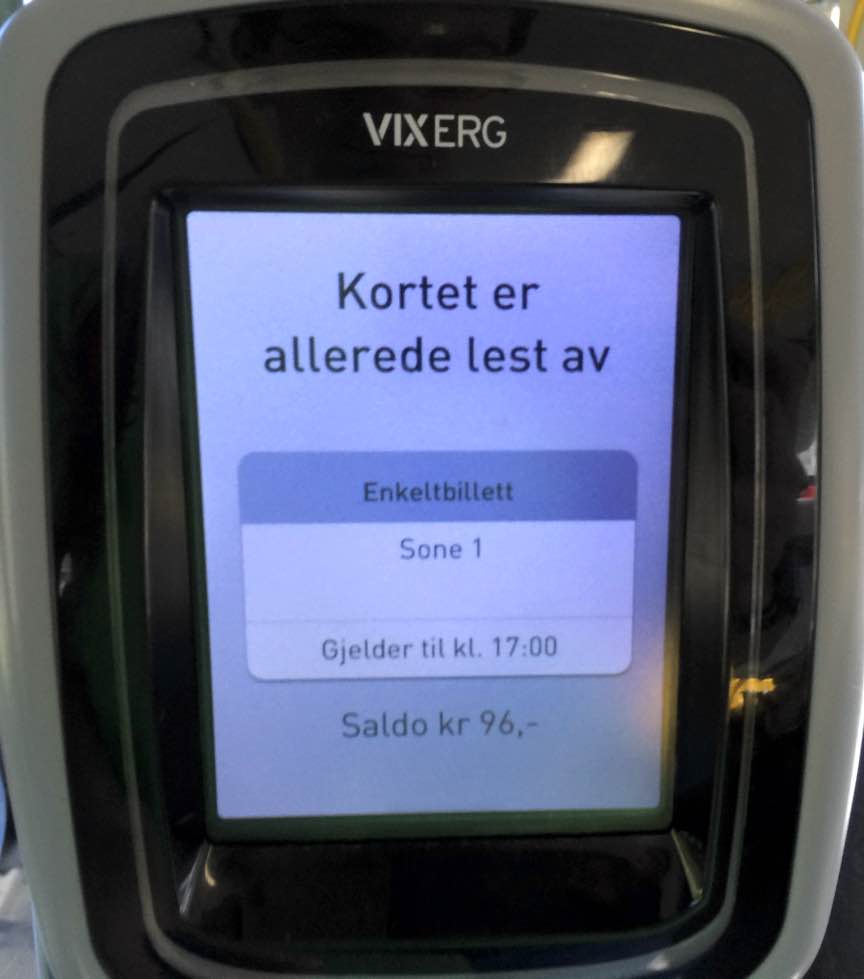 You can see, that ticket is active to 17:00, and I activated it at 16:00 (you can also notice that I have 96 NOK left on it). The ticket is valid for 60 minutes. That means that during that hour you can change on your route without buying a new ticket. For example: you activated the ticket, took 15 minutes ride on bus, took off, went for a shopping for 30 minutes and then took a tramway. Having checked the ticket with terminal you saw, that it will be valid for 10 more minutes, but you know, that your trip would be longer then that, so it will expire before you will get to your destination. But that counts as a fare usage anyway, and you won’t get a fine as your ticket was valid in the moment of boarding. In fact that never happened to me, but ticket-controllers see the expiration time in their terminals, so it shouldn’t be a problem.

Couple of times my trip consisted of bus, tramway and then boat to one of the nearest islands - and all of this counts as a single journey, so it costs the same 32 NOK. And plus 32 NOK for the returning trip.

Of course, there are seasonal tickets for a week/month/year, but I use transport rather rarely, so for me single tickets are enough.

Paper tickets can be disposable (upper) and top-up-able (lower). 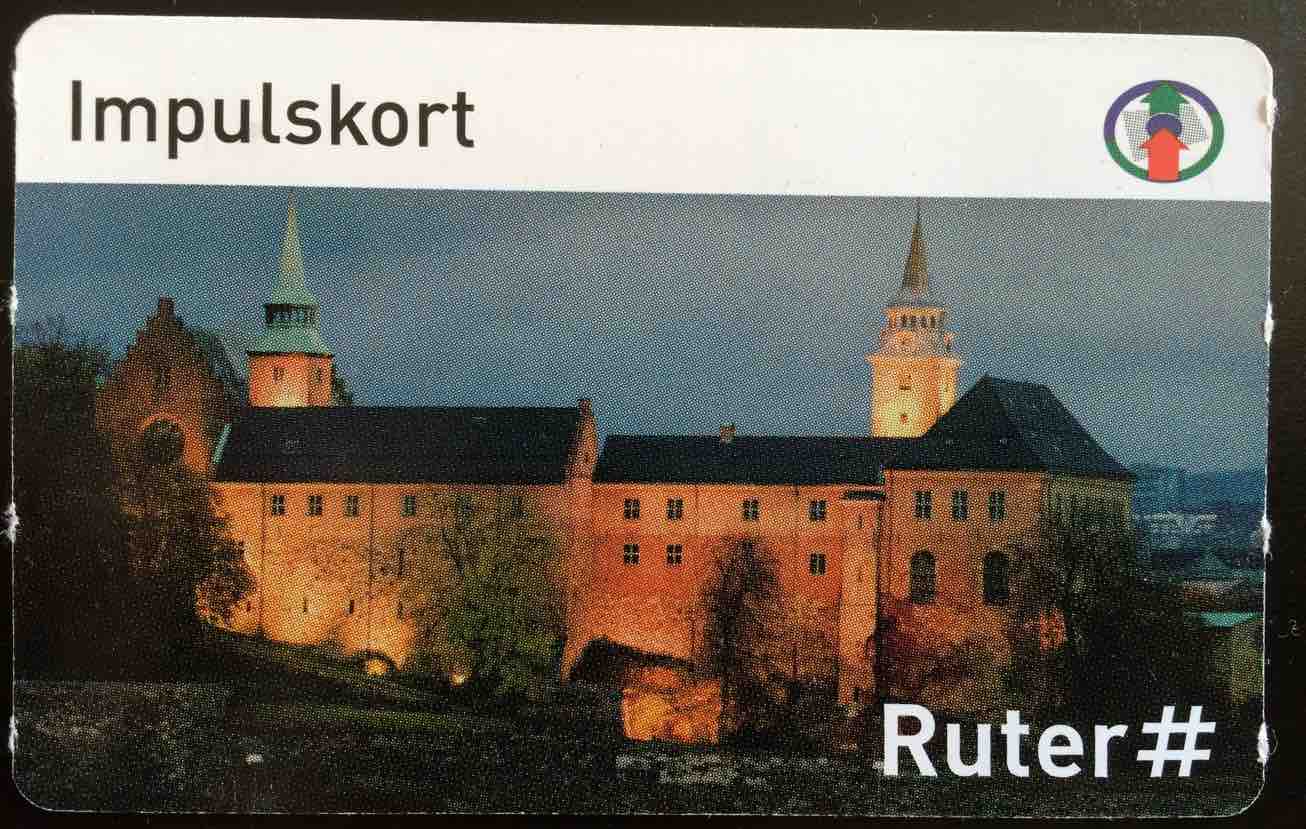 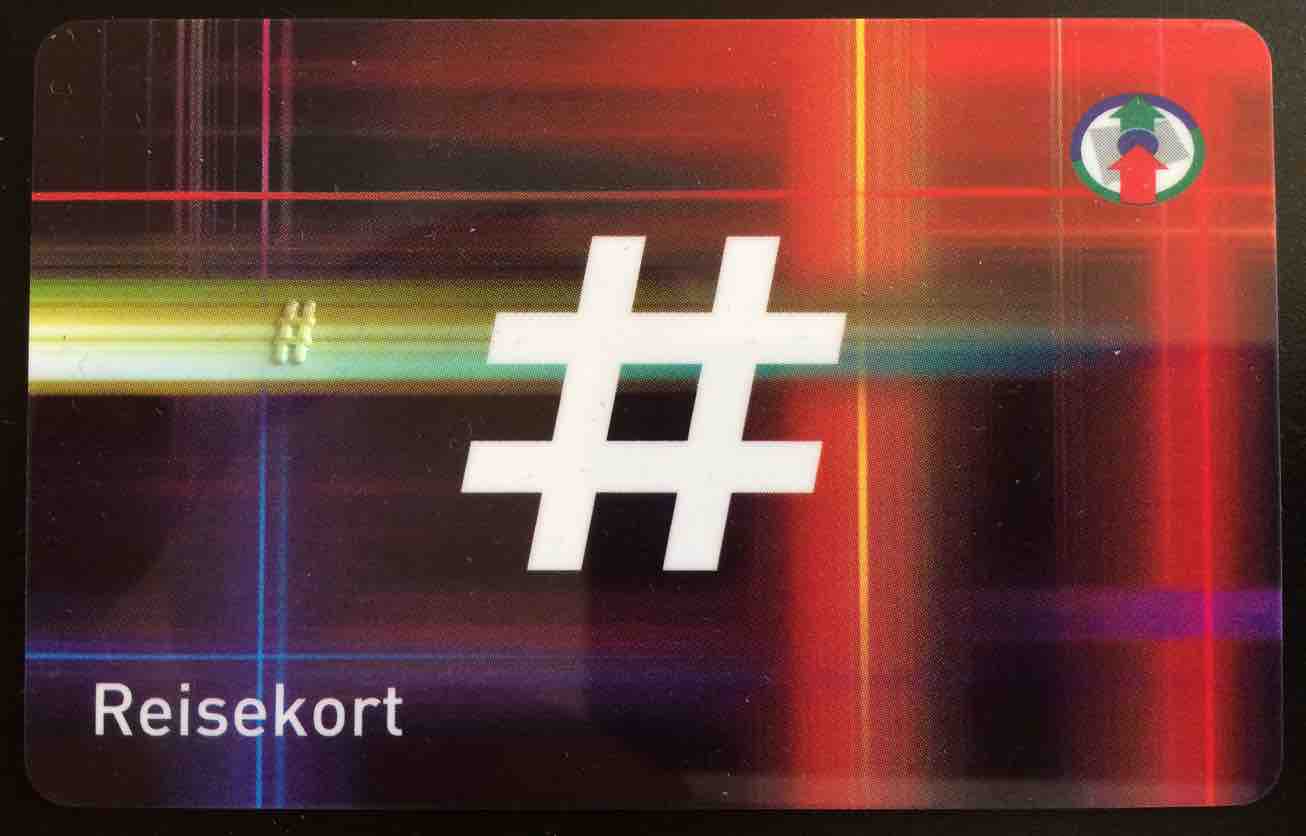 You can buy/top-up ticket in the ticket-machine which suddenly is presented not on every stop, so it would be better to have some more tickets as reserve. You can pay with bank card or coins (machine doesn’t accept paper money). 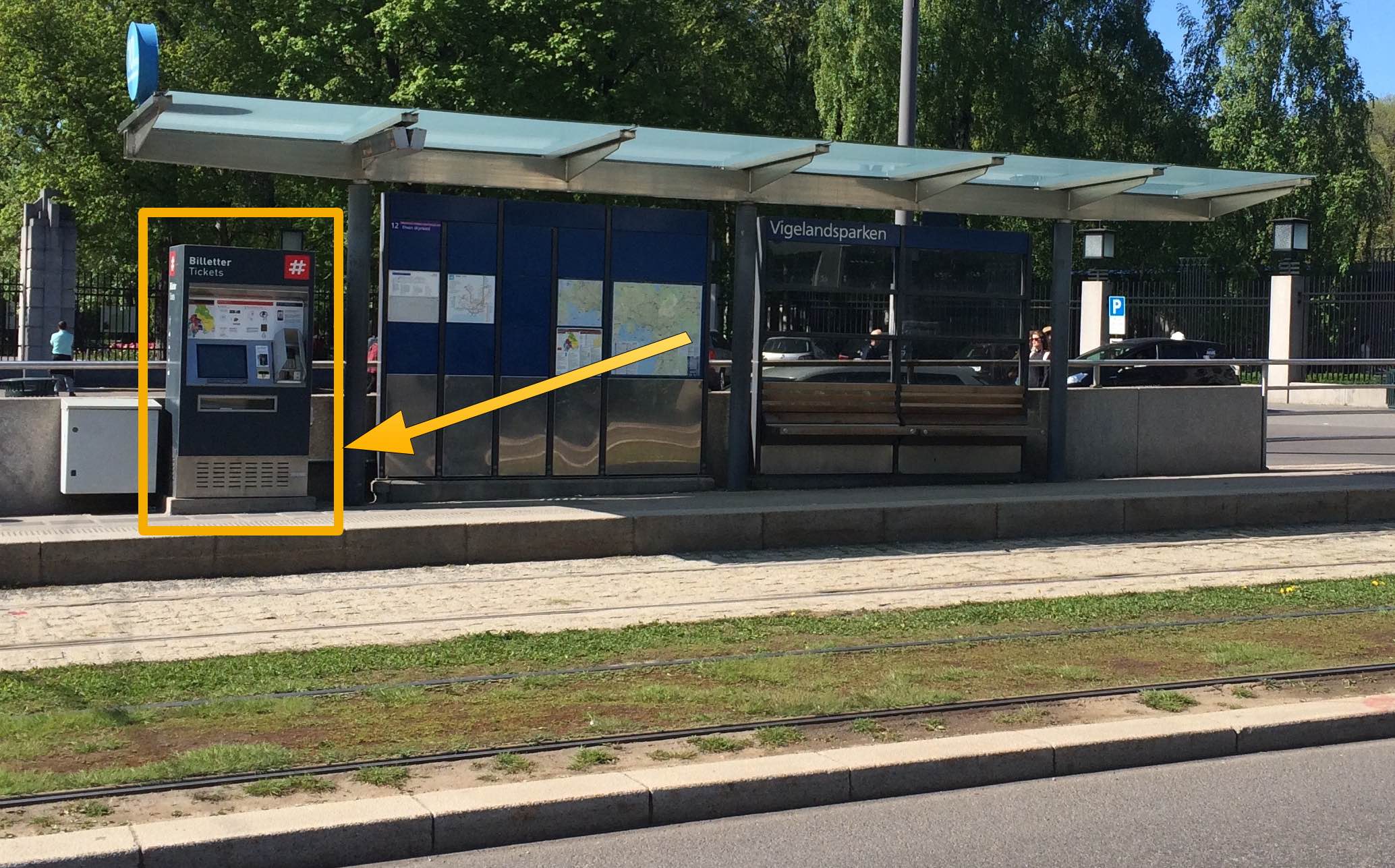 Of course, it’s better to have top-up-able ticket (aka Travel Card), but you cannot get it from ticket-machine (you can only top-up it there). You can buy (and also top-up) it in the stores like Narvesen or 7-Eleven.

But you can forget about all kinds of paper tickets as there is this app - RuterBillett.

You need to install it on your phone and tie your bank card to it. Now you can buy tickets right in the app before the start of your trip, and in case of ticket-control you just show the ticket screen to the ticket-controller.

The ticket you buy activates in 2 minutes or at specified time. After being activated ticket starts a timer of its validity. That’s just amazingly convenient and cool. 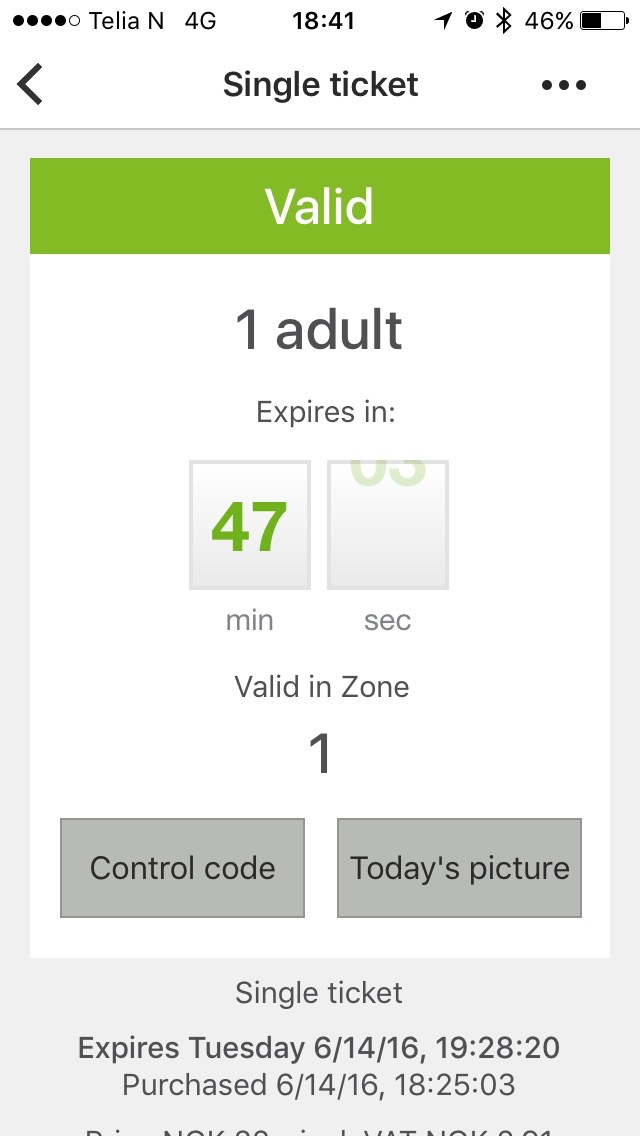 There is only one minus. The app allows to tie only cards from Norwegian banks. I tried all my Russian cards and none of them worked, so for the first months I had to use Travel Card and top-up it in the ticket-machine every time.

Separately from the ticket app there is an app RuterReise for route creating. It’s just super-must-have-thing.

Instead of thousands of words, here is a couple of screenshots:

So, I’m pretty satisfied with Oslo’s public transport system. Well, except for the tickets price - it could be lower.

Some days ago, as usual, I charged a Ruter card for an upcoming month. I tried to activate it right away, and terminal shown me that I still have 2 days on my previous ticket. Okay, I thought, the new ticket will start after the current one expires - something you would expect to be by design, at least that’s the way it worked in Moscow.

One week later a ticket-control at T-bane asked me for my ticket. I shown my Ruter card to them, but they told me that it is not activated. And right after that they shown me their terminal with their system, where it was clearly marked that I purchased my ticket a week ago and tried to activate it. But since I did it before the previous ticket expired, they explained, the new one did not activate.

So what is the fucking point in storing all that information in your system, if it is not used for anything? Why on earth wouldn’t the new ticket activate after the previous one expired, if user explicitly tried to activate it? Bloody hell.

Good thing they let me go without paying any fine, although they said that they put me in some “system”. Well, I’ll know better next time.

norwaytractor
Note that even if you sign-in with your e-mail or GitHub, you still won't be subscribed to replies. That is by design of remark42, unfortunately. To get updates about new replies/commends you need to explicitly subscribe to them either via e-mail or RSS.