In September we went to IBC - TV and broadcasting conference, it’s about set-top boxes, TVs, equipment and stuff. For me it was the first event where I participated not as a visitior.

Why are we here

On this event we are a bit out of context, though Qt for Device Creation targets also STBs, but manufactures in 90% cases use HTML for GUI. Why - that just happened.

But in case of HTML for UI web-browser is a problem, because something has to render this HTML. And before Opera was acquired by Chinese most manufactures used Opera for some reasons. WebKit is quite popular as well. And those who chose Qt, they used it mostly because of Qt WebEngine. So, it’s all about the web-browser.

For example - ABOX42 kindly provided us with STB for demonstration at our stand. They build their box with Qt, but once again - whole UI is HTML-based, and from Qt they used basically only WebEngine, and that’s a pity: 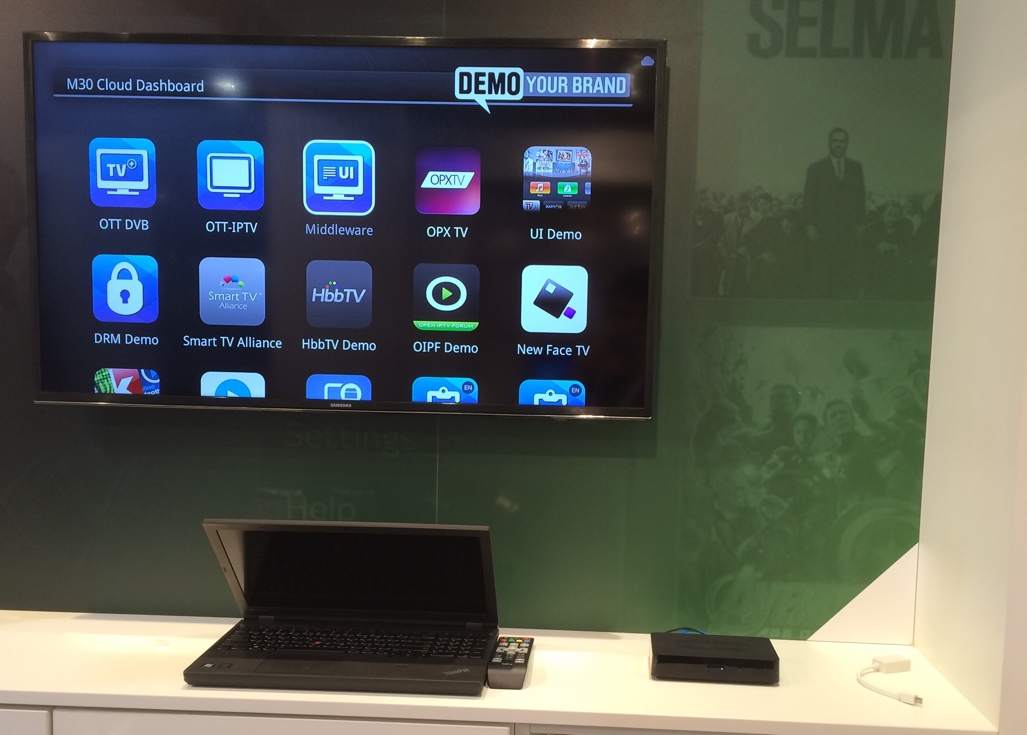 So, that’s what attracted visitors to our booth - our Yocto Linux images and WebEngine, because you need to push web-browser into embedded device somehow. Everybody was excited about performance of our native demos (this one, for instance), but nobody was ready to migrate his STB from HTML to C++/Qt, because, you know, STB ecosystem is based on HTML and nobody want to risk and go outside its borders. But the vibe was that quite a lot would like to. So, we’re waiting.

Some visitors were asking, are you the same Qt, you still alive? Others just were coming to give respect and thank us for being so cool. But as soon as we started to talk about licenses, some just smiled and others surprisingly discovered that there are some licenses. Lots of people weren’t even aware, that Qt is not just “UI libraries”, but a lot of things, including embedded development. And after listing differences between licenses and mentioning de-TiVoization in LGPLv3 the discussion finally would go in more interesting way.

The area is huge - it’s a convention center RAI in Amsterdam. There were at least 15 halls, and each one was very big. For the 5 days of the event I wasn’t able to visit all of them, because I had to be at our stand and there was not enough time. The feel of world wide status event is legit - I guess, everything about TV and broadcasting was there, starting with TV remotes and ending with space agencies with satellites. And STB companies, of course. By the way, I was at the stand of the very same TiVo and even snatch a diary with their logo ) 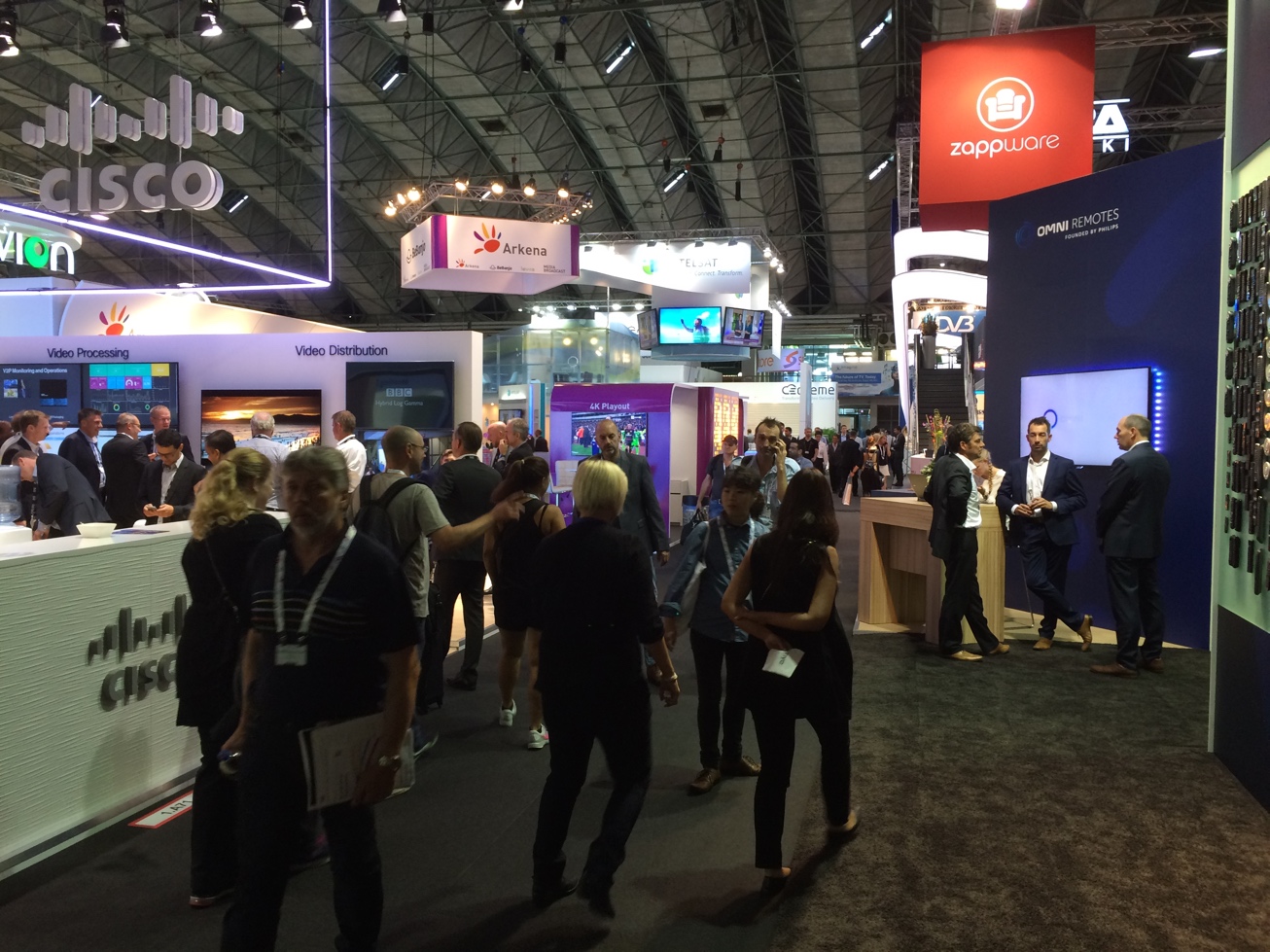 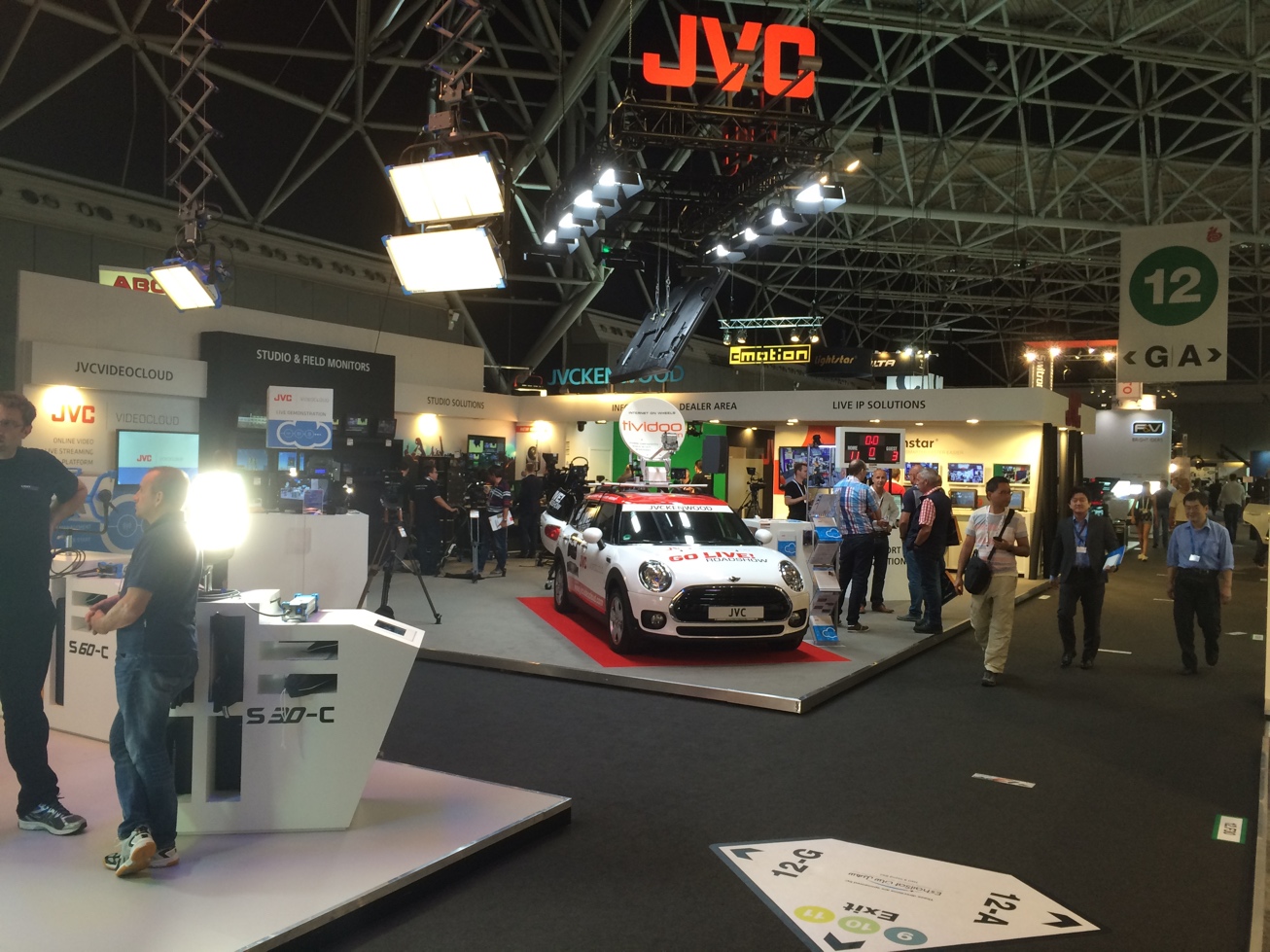 The stand included isolated locking booth with lockers inside. Although, the intruder-proof of the construction was not the best, it’s still quite nice for dropping bags with some valuables.

Proper internet connection was not included into the price of participation and is paid separately. And for some reasons, it’s crazy expensive - price grows with each megabit of speed, and for 5 Mbit/s connection we payed 2500 EUR. Not bad, eh? By the way, there is no public WiFi anywhere in the whole place (of course, no point to do that when u’re selling internet for 2500 EUR), and the only source of internet was a lonely RJ45 cable at our stand. That’s why WiFi router is absolutely necessary thing to have on such events (preferable with 2 additional patch cords).

There was also a surprise to have only one power socket. Good thing, that I brought an extender with 5 sockets.

We also ordered prints on the walls and two TVs: 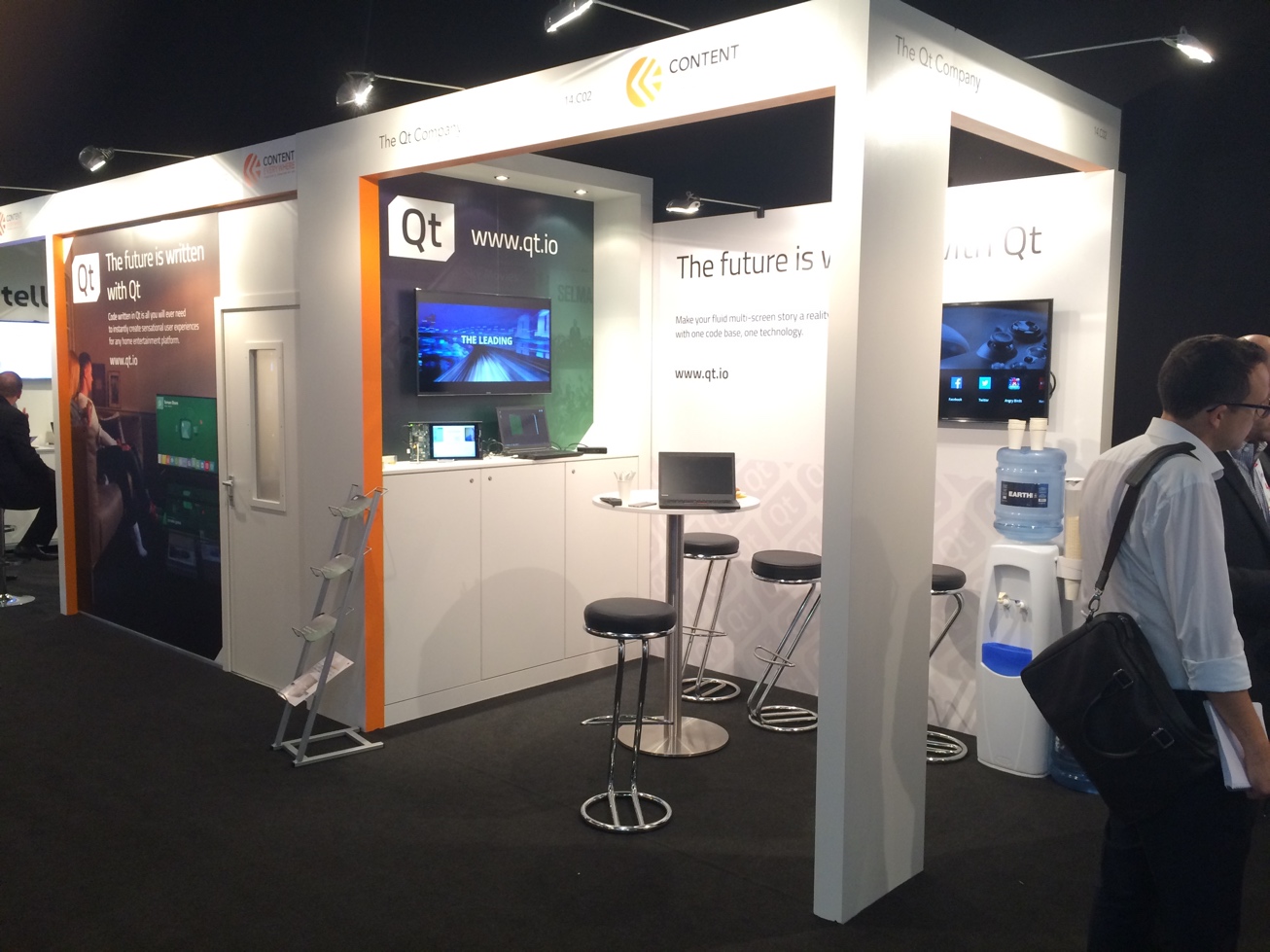 TVs were with HDMI and all of the sudden my laptop has only VGA or MiniDP, so it’s a luck I had an adapter.

From the food at our booth we had small capsule coffee-machine (with set of capsules in the bag), packages of juice and cola (at the picture they’re in the locker) and cooler with water: 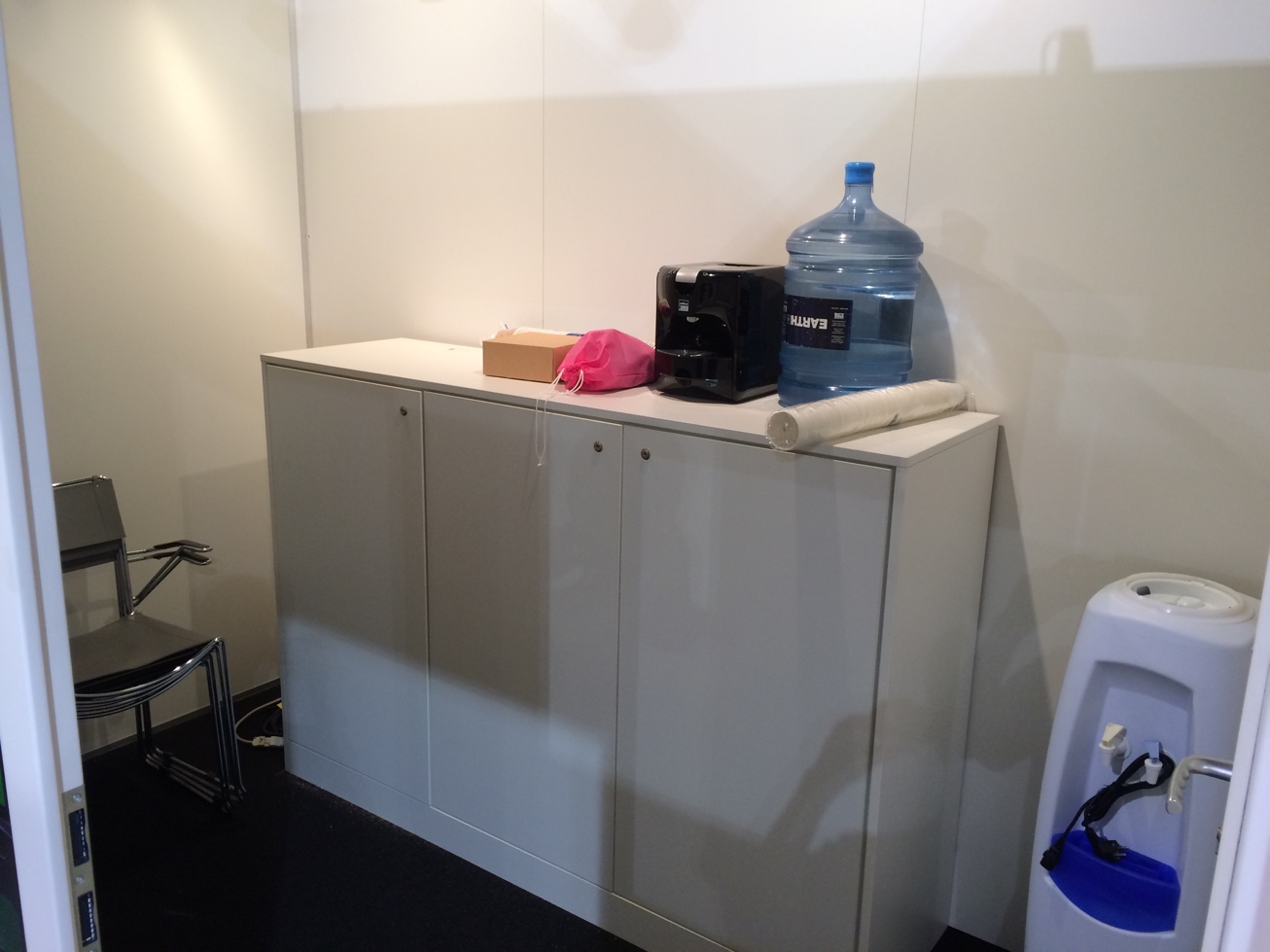 Lunches are delivered on demand (some veggie crap and other horrible things) or you can go outside and grab some something nearby.

They also gave us free travel ticket for 5 days in Amsterdam, but it could be used only with certain public transportation company.

Shuttle from airport to expo was not where it should be on the map. As for shuttles from expo to hotel, they were not easy to find as well, and nobody from the expo’s staff knew anything about it. One time we were even pointed to completely opposite direction. Not a happy experience to wander around the place looking for a ride, I’d say.

From now on my check-list for attending events is the following:

The event has its own mobile app, but it’s ugly and useless, I couldn’t work with it. For searching participants and filtering them by countries it’s better to go to the website.

We were also provided (for additional fee, most probably) with scanning device to scan visitors badges, so we don’t have to write all the info manually on paper. All the scanned data is sent to some server and in the end we get it in XLS file. The scanner turned out to be a simple smartphone with NFC, we received Nokia (hello!), with self-made ugly app. So, it’s a good idea to bring your own NFC smartphone with your own app to not to depend on some 3rd party service and not to share your info with anyone. After the conference end we gave back the device and some time after we received all the data we scanned via e-mail.

In conclusion, even though we weren’t actually a perfect fit for this event, people were coming to our stand, asking for evaluation packages, leaving their contacts. Part of them has already turned to sold licenses.