In Russia electricity system is quite simple. You have price for kWh, you have meter, and every month you pay for what you consumed. In Norway (in Oslo, to be specific) it’s a bit more complicated.

Right after you rented the apartment/house, you need to find the number (ID) of you meter and register it (here, as I recall), so invoices will come in your name. If the meter is automated, it will send the data to the company by itself. If not, then you will have to do it.

How the price is formed

You pay for two things in electricity bill (two components of the price):

For nets you pay to this company - Hafslund. There is no choice here, Hafslund simply owns the infrastructure. So far everything is simple.

But for kWhs you can pay to any company of your choice. Despite the fact, that all the infrastructure belongs to Hafslund! And also despite the fact, that Hafslund sells kWhs as well, so you can choose Hafslund as your supplier (and it is your supplier by default)! No, but seriously, it’s like I have a bakery and I deliver bread to my customers using my own park of automobiles, but in the same time I allow some external companies to ride on my cars and to sell my bread for different price. I meditated several months in desperate attempt to deny this madness, but since this is not my monastery, I got along with it. 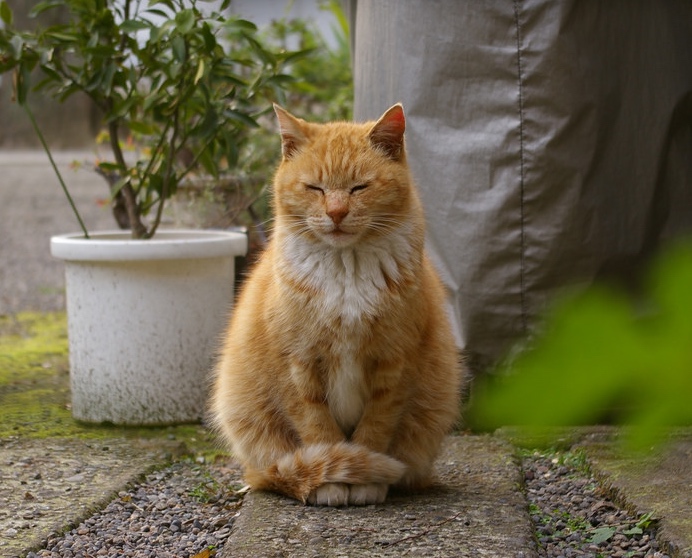 So, one more time: every month you have to pay Hafslund for nets, but also you have to pay chosen supplier for kWs, and you can choose the very same Hafslund as a supplier as well (and that will not free you of nets charge - I want to emphasize that just in case).

This is so amazing, I decided to draw a picture, so there would not be any doubts or misunderstandings left: 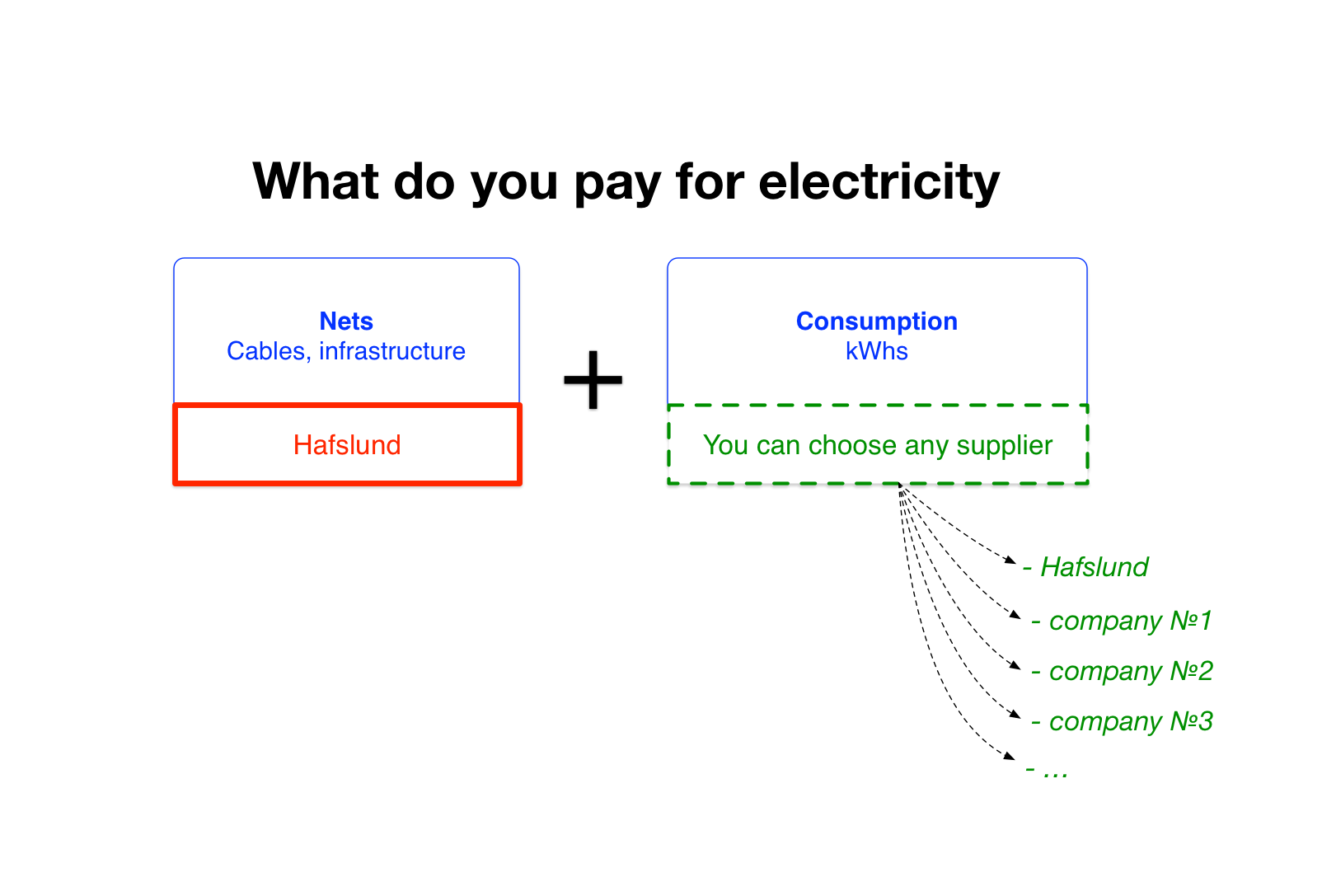 So, you can choose who to pay for kWhs. The choice is QUITE HUGE: https://www.strompris.no/en/leverandoroversikt-3/. Seriously, in a city that smaller than just one district in Moscow, there are more than hundred (and that’s fucking not a figure of speech, it was almost 140 last time I checked) electricity suppliers that don’t own and don’t produce the electricity they sell. From all this I went into meditation for another two months.

…And I discovered all this from some guys from Fjordkraft company that approached me in the store. They told me all this and also promised super good subscription if I would sign the agreement with them right now. I agreed and signed. But then nothing happened, not on the next day, not even after a half of a year. They just didn’t care to process my request for the subscription.

Anyway, you chose the supplier from the list, now you need to go to its website and register there with your meter’s ID. I chose one of the top-5 cheapest: it was Agva. I chose it mostly because of the fact that from all top-5 they had the most not-bad-looking website. I registered, specified my meter’s ID and got a subscription.

In the first month I received a significantly less amount in my Agva’s invoice comparing with Hafslund’s invoices. At first I was happy, but couple days later I received an invoice from Hafslund for the nets, and now the full price turned out to be the same. And that was the moment I finally understood how the system really works.

But okay. I was hoping, that in the end it would still be cheaper (or what the point to have that much of 3rd party suppliers then?) and I decided to leave it like it is (Hafslund + Agva).

At some point I wanted to see my kWh-consumption and, logically, went to the Agva’s website to log into my personal page. But there was no one. I tried to follow the identification procedure where you specify the meter’s number, because I was hoping that it would recognize me, but it just repeated all the registration procedure. As a young naive programmer, I didn’t even think that it could lead to some consequences - I’m already in the system for more than a month after all. Fat chance. As I discovered (after two months of messaging via e-mail), the Agva’s system indeed re-registered me again, destroyed the previous subscription and got me a new one, which charges about 1500 NOK payment for 2 months ahead and refunds the difference after each months based on the meter’s data. 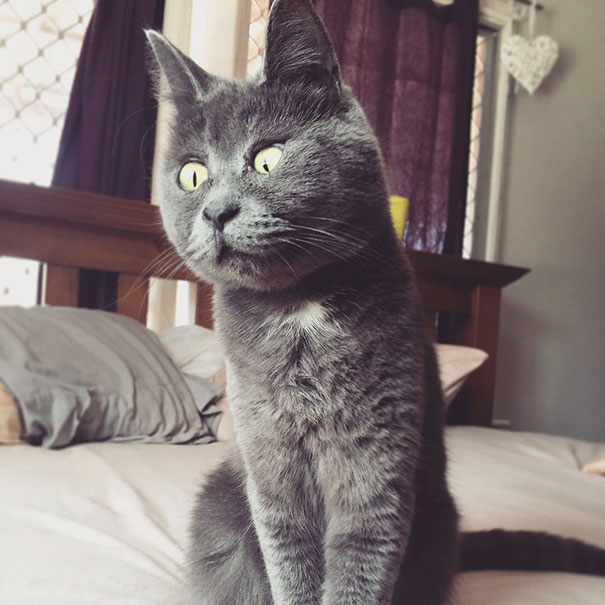 I immediately wrote to Agva, asking what the fuck was that. After a week I received an answer that I changed the subscription. I waited another week for their response to my question, that I did not do it and actually I want you to clarify how did it happen. But that response time was unbelievable for me, so I wrote to Hafslund, asking them to take me back and give me their subscription. After couple of weeks (no need to rush, huh) they switched me to their subscription. Right away I wrote to Agva to notify them that I changed a supplier and that I ask them to refund all unused kWhs from the last invoice. And I did not receive an answer for that e-mail.

But after one week Agva suddenly discovered that I’m not their client anymore, and immediately called me asking to come back. For my humble objections like what about my problems and un-answered e-mails they said without hesitation that they don’t know about any. Then I said that “I’ll think about it” and hang up. Since the next day they rained lots of calls on me - they called every day and several times each day, but I didn’t pick up a single one. After several days they stopped (or I blocked them in the phone). After another several days they replied for the e-mail about change of subscription in a way “you did it”. E-mail about refund was still without an answer. Then I sent another one and asked them to provide a written refuse to make a refund. For this one they replied after two weeks, and after another two weeks I got the money, and after another two weeks they wrote that money has been sent. This is just unbelievable level of customer’s service. I really have a feeling, that Agva is a one-man-company (and perhaps his wife), and they “work” from their apartment. In the evenings. On Tuesdays of even weeks. If they won’t forget to.

So, I switched back to Hafslund, because it’s just the most convenient way and it’s better for my nerves. You can see your consumption on Hafslund’s website, and also all your previous invoices. And by the way - I didn’t notice a significant difference in prices. So what the hell is the point in having more than hundred of 3rd party suppliers?

By default you get invoices in paper letters to your home address. Invoice contains an amount to pay (nets + kWh, if you have everything from Hafslund, or it will be 2 different invoices: one for nets from Hafslund and another for kWs from chosen supplier). But paper invoices cost money, so if you don’t want to pay for this, you can pay online - to get eInvoice right in your online-bank and pay it there. Thanks to this “paperlessity” you can even get the cheapest subscription.

But Hafslund surprised me here - just having eInvoice turned out not to be paperless enough, and they requested me to add AvtaleGiro (direct debit) as well. To my question “and why eInvoice is not enough for you, we already don’t exchange any papers, we “already” have absolutely electronic communication, everything is “already” online only” they replied like “yeah… that’s not enough, we want direct debit”. I was so tired from all this electricity story, so I just did what they wanted.

Totally forgot to tell you about prices. For example, that’s for 70 square meters flat:

Basically, everything depends on your consumption: what temperature you set for you heaters, do you have heated floor in your bathroom and so on.

But that’s not the end. When I was browsing the Haflsund’s website, at some page I noticed notifications (lots of them) about additional services, and I decided to close them. There was an “add” button and there was a “close” button. Naively assumed, that close-button will close the notification, I closed two of them: one about some insurance and other about donations to the nature-protecting fund. Right after that I received e-mails about two new services being added to my subscription. 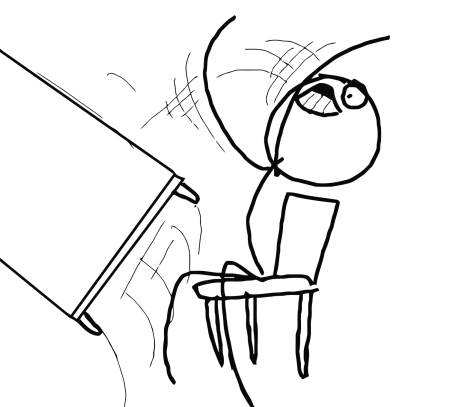 Having knocked over the table, I closed this fucking page in order not to click on, I don’t know, some text, background image or any other control. Fuck those notifications, let them be, I will never open that page anyway. And I immediately wrote to Haflsund, asking to delete those services because they were added by accident. Soon enough I received an answer that both services are deleted. I calmed down.

But I shouldn’t. In the end of the month both services were included in the upcoming payment. 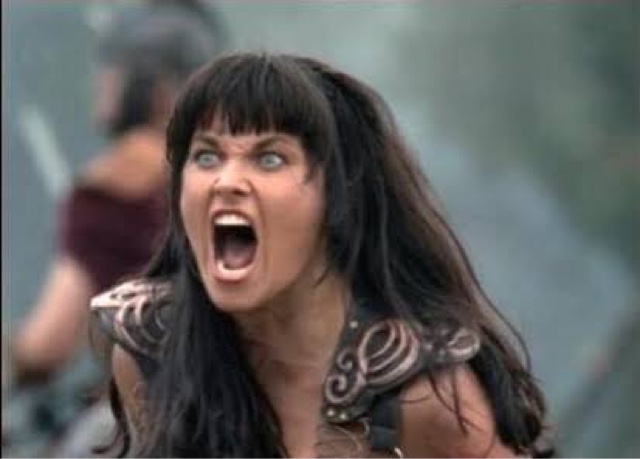 My screams were heard even by bears at the North Pole. I wrote to Hafslund again, having attached previous e-mails where they confirmed the deletion of services. After a day they replied that invoice was redone and they deleted those services from it.

Can’t wait to see the next month invoice in order to make sure that those services are deleted for good.

Why such simple thing as payment for electricity is SO COMPLEX? How is it possible to implement such thing in such non-trivial way? What the fuck is the point to have more than a hundred “companies” that sell nothing but air? And all this in a city with less then a million people? Carl?!

After I moved to another apartment, I’ve updated the address (and Malernummer) in my Hafslund account. That turned out not to be enough because Hafslund started sending me e-mails and SMSes asking to fill also Malepunkt ID or something, which I would gladly do but I don’t have anything else written on my electricity counter except for Malernummer. One week later they just stopped spamming me and miraculously found this value by themselves. So what was the fucking point?

But that’s not all. Soon enough I received the first invoice to the new apartment, and it was again a paper one! And when I asked Hafslund why is that, they said that I need to create a new AvtaleGiro/eFaktura agreement after changing the address. But what’s wrong with the old one? Did my ID in their database change or what? Goddamn, what a retarded system.

norwaytractorfail
Note that even if you sign-in with your e-mail or GitHub, you still won't be subscribed to replies. That is by design of remark42, unfortunately. To get updates about new replies/commends you need to explicitly subscribe to them either via e-mail or RSS.