I got a phone call the other day. The man on the other end told me (with a strong indian accent), that he is from “Computer Solutions” (or something). That already sounded fishy, but he also used my full name, which lowered my guard for a bit, so I did not hang up right away. 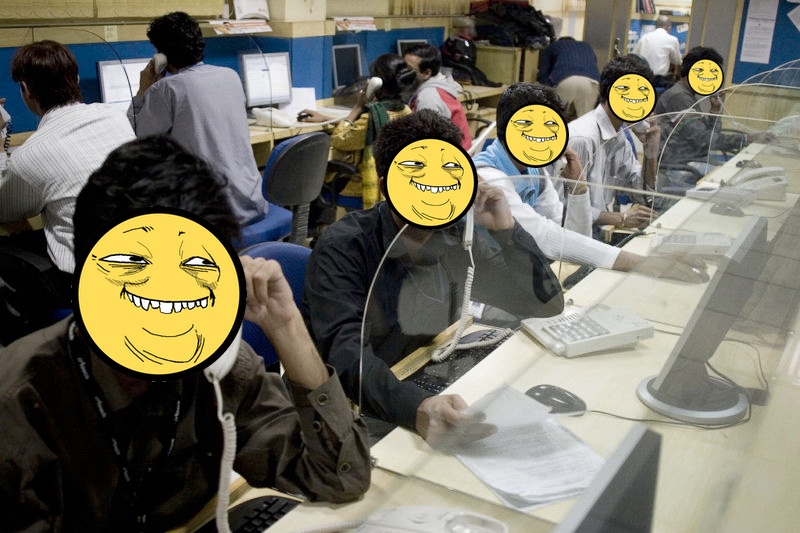 Right after “how are you” he said that according to their “systems” my computer is in danger, because, as they can “see”, there was some “hacking software” downloaded to my computer, and they will now help me to get rid of it.

Right there it was pretty obvious that this is some scam, but I said okay, let’s do it.

Here’s a transcript of the following conversation:

He “switched” me with a speed of light, and another man continued the call (needless to say, he also had an indian accent), but I could still hear the same background noise - some other people talking on the phones, like a big call-center, so apparently he “switched” me to his neighbor.

- Sir, did you get informed in what regard we are having this call?
- Yes, apparently I have some kind of problem.
- Yes, you do. Now let me help you. What button do you see next to the CTRL key?
- I see an option key.
- No, there should be a Windows key.
- [decided to speed him up] But I have a Mac, there is no Windows key here.
- [pause] [then apparently some panic googling] ...Okay, then click on the magnifying glass on the right of your screen.
- I don't see any magnifying glass.
- It's on the right side of your screen.
- I see a digital clock there, but no magnifying glass.
- [long pause]
- [decided to speed him up again] Ah, you want me to launch Spotlight?
- Yes! Open Spotlight.
- It's open.
- Type there: "terminal".
- Okay, I opened Terminal.
- Great! Now type there "sh ..."

And then he started dictating some script letter by letter, and all that with an indian accent over the phone. At that point I couldn’t hold myself any longer, so I laughed at him and hung up the phone.

I now regret that I couldn’t keep going, because it’s such a gold mine of opportunities.

But okay, for me it was an obvious scam. However, it seems to me that a lot of people easily fall for this silly scheme. And if these twats were using just simple “we are from IT department” instead of this unknown “Computer Solutions”, it would be even more convincing. And indian accent only helps them, because getting some gavnesha from support is only normal and even routine.

And where did these pieces of curry get my name from? It very well can be this fucking 1881.no, but I suspect it has leaked from some of the organizations where I had to register with my phone number. I would like to bet on DNB, by the way, or any other bank. I mean, what is the point of scamming some random housewife?

But that was not the end of it. Almost immediately after I hung up, these fucking rajeshes and kumars bombarded my phone with calls from several different numbers. It was an ongoing chain of calls with less than a second in between. It was absolutely impossible to use the phone during that.

Since they were not stopping, I started adding their numbers to the blacklist, and eventually intensity of the calls started to decrease. But it was still ongoing till the end of the day, continued for a few hours on the next day, and then for an hour on the day after that, and then it finally stopped.

So either I blacklisted all the numbers from their pool, or they just gave up. And that’s an interesting pool they have - the numbers were from several different countries: not only Norway, but also UK, Germany, Spain, Denmark, Greece and others.

Since I am in Norway, all the numbers without country code most likely have +47.

And it was easy to understand which numbers are from scammers - like any normal person nowadays I don’t get any phone calls at all, so these were the only ones calling. Fucking retards.

I wonder if there is a way to report these numbers to mobile network operators, so they could take them away from the current owners. But since they are from several different countries, that seems to be a pretty difficult task.

Oh, and I really expect karma to punish these wankers.

irlfail
Note that even if you sign-in with your e-mail or GitHub, you still won't be subscribed to replies. That is by design of remark42, unfortunately. To get updates about new replies/commends you need to explicitly subscribe to them either via e-mail or RSS.