KeePass as internal secrets storage for a team

For a long time in our team we’ve been storing logins, passwords, keys and other things like that in personal password managers or just plain-text files, spread around people’s machines, and no one had the full set. Finally, we decided to stop this chaos and start using one common passwords database. 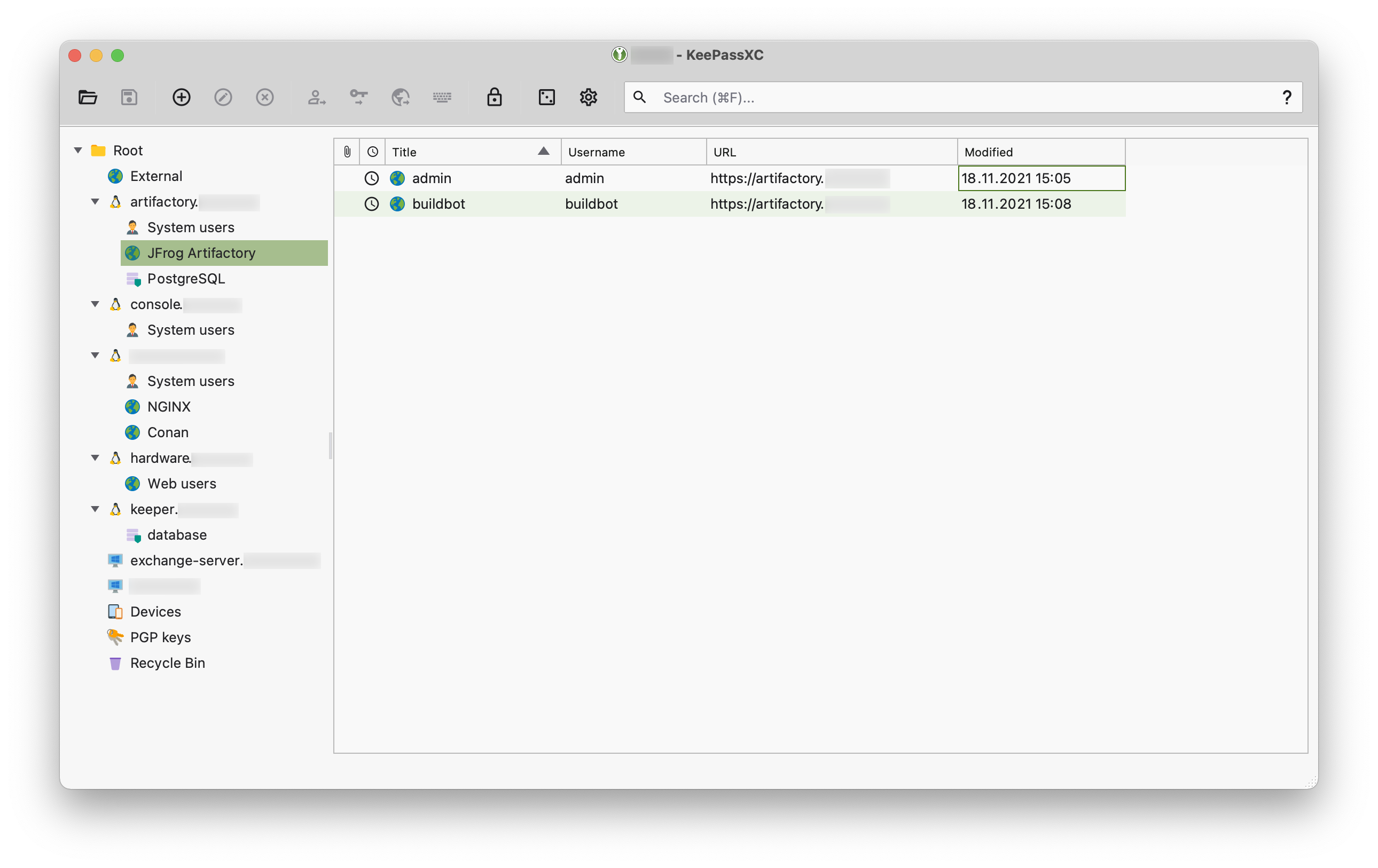 Having evaluated several options, we chose KeePass. It’s not exactly meant for multi-user usage, but we came up with some sort of workaround.

There are many password manager solutions available, but not all of them meet the following requirements:

So the choice is rather (very) limited.

Personally I’ve been using 1Password, v6 and v7, while it’s still not based on Electron, with ability to have an offline vault and without subscription. And that was my first candidate, especially that they have some additional functionality for teams, but then they announced v8, which is destined to be a total shit: cloud-only, subscription-only, Electron-based - so that’s no longer an option. Here’re also some similar thoughts on the matter.

Then there are some solutions that do meet most of the requirements, and for example we could consider using Bitwarden or Passbolt. But sadly neither of these two have proper native client applications.

So KeePass ended up being basically the only suitable candidate:

Most of the compatible client application are proper native (without Electron garbage) applications. Many of those are available free of charge.

The full(?) list of clients on all platforms can be found here, under the “Other downloads and links” section.

Out of the desktop clients I liked the KeePassXC (sources) the most. Unlike the reference client, which is written in C# and is for Windows only, KeePassXC is based on C++/Qt and works on Windows, Mac OS and Linux. It also seems to have better performance / more responsive (and nicer) GUI.

One thing I was worried about is whether KeePass has the functionality of storing 2FA/TOTP codes, but it certainly does have that: 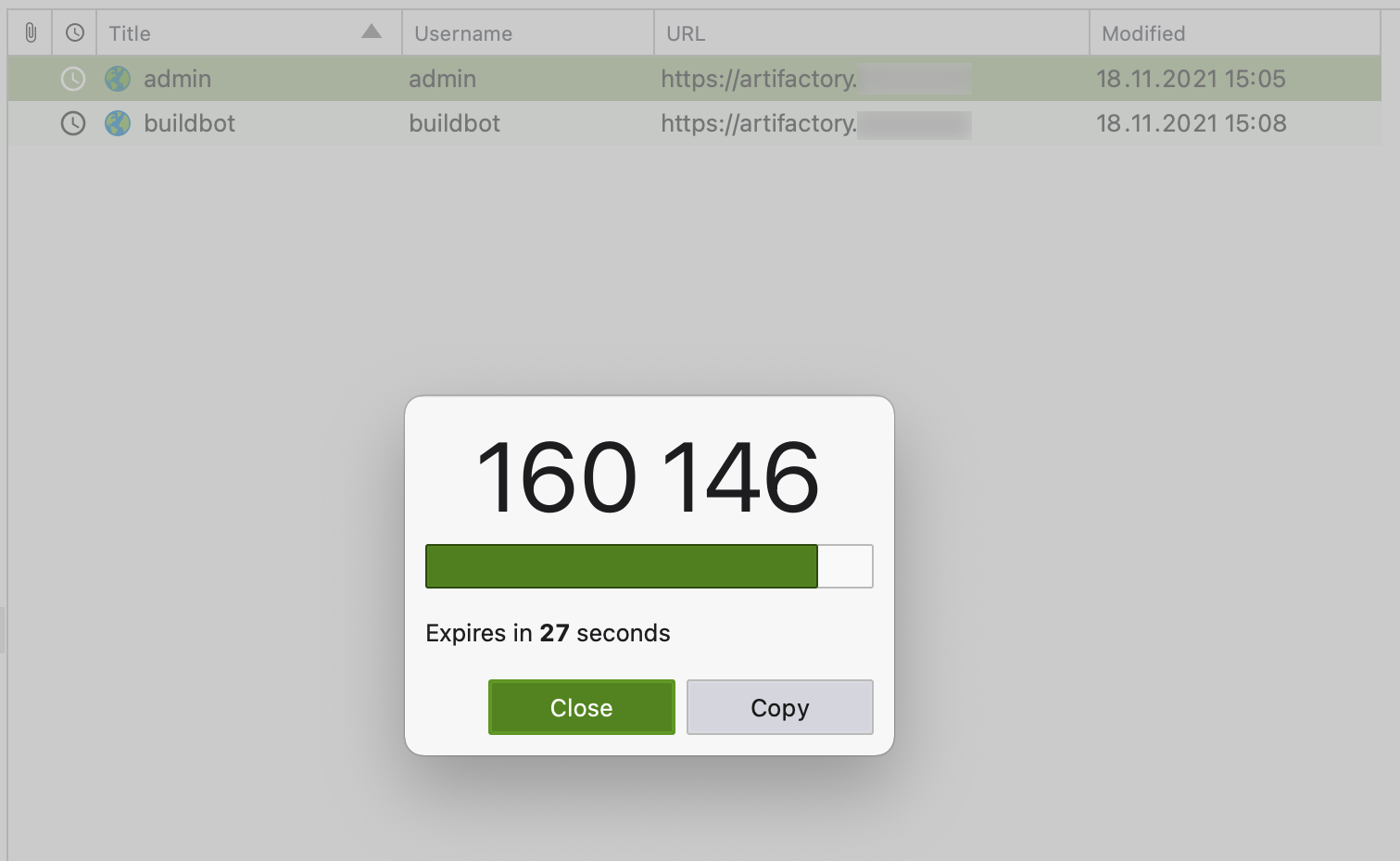 Mobile clients I haven’t tried yet, but looks like on iOS the choice comes down to these two:

Both are paid applications and are not cheap, but they do have a one-time purchase lifetime license option.

Android clients I haven’t looked at, as I don’t have Android devices.

As I mentioned, KeePass isn’t really meant to be used in a multi-user environment, as there are certain challenges in keeping the original database in order and tracking changes. There are, however, solutions like Pleasant Password Server, which can help with that.

As a workaround, we came up with the following plan:

The database file (let’s call it passwords.kdbx) can be protected by two security/access factors (and/or with a YubiKey):

To add a key file, enable additional protection on creating the database: And here’s how it will look like when you will be unlocking the database using both the password and the key file: 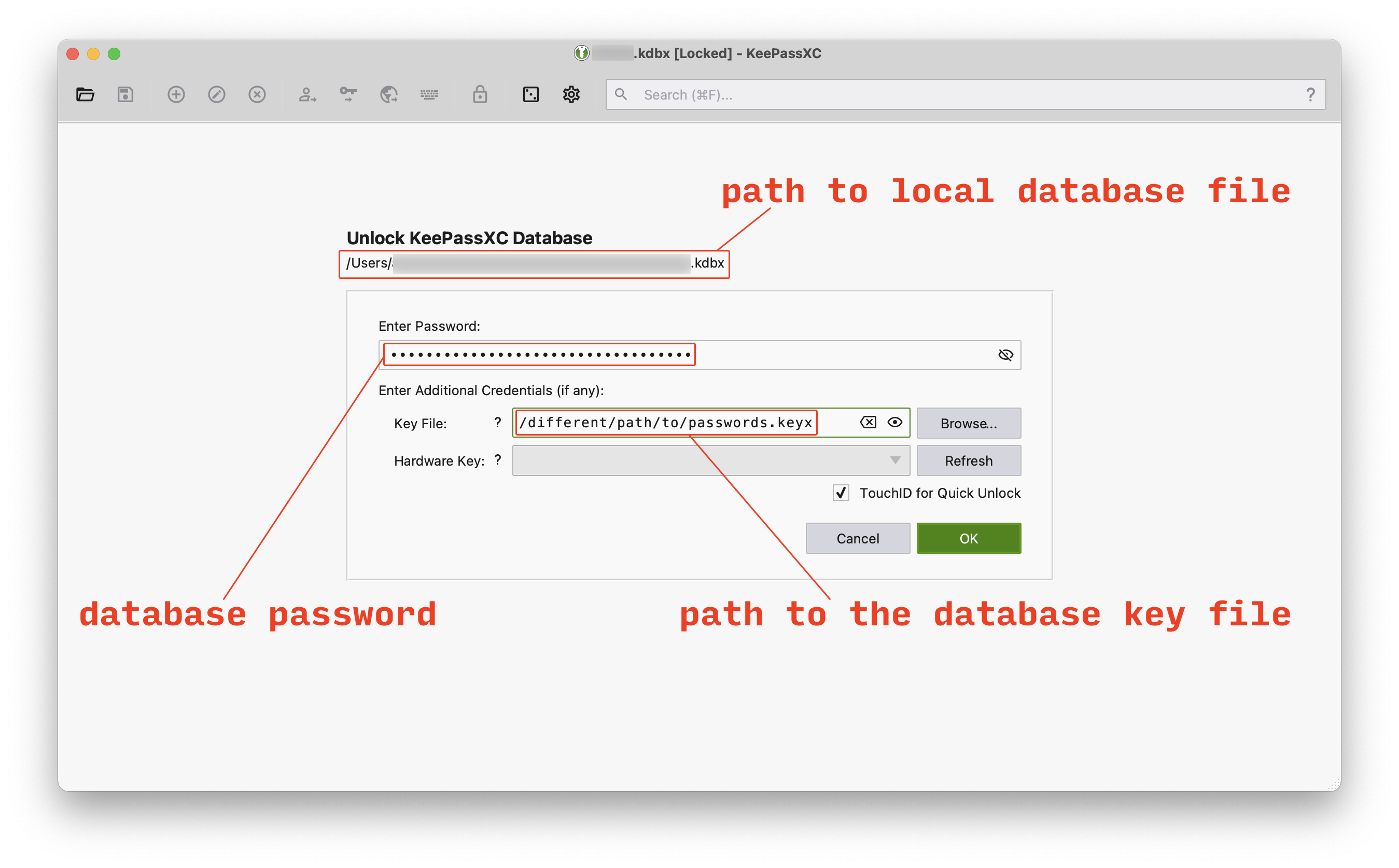 The paths to database and key file should be different here, as, once again, they should never be stored together. And of course the key file should not be part of the database Git repository either.

For such purpose (hosting a Git repository) it is enough to create a small GNU/Linux VM. Certainly make sure that it is not exposed to the internet, so team members can connect to it only from the office network (or via VPN).

The server should definitely be protected with some additional security measures, comparing to your regular hosts. As a bare minimum disable password authentication, so only SSH keys are allowed:

Generate and add an SSH key for administrator account to /home/ADMINISTRATOR-USER-NAME/.ssh/authorized_keys (more about system users below), make sure that you can connect with it and only then restart the SSH service, to apply the sshd_config changes:

It also wouldn’t hurt to setup fail2ban, just in case:

Further server hardening I leave up to you.

Speaking about users and home directories on the server, here’s a suggested configuration:

The roquelaire user is the owner of the database repository, which is placed in his home folder, and his account is used to access the repository over SSH.

This account also will have multiple SSH keys - one per team member. It is important to note that this user should not be able to modify his authorized_keys, to prevent regular team members from adding more keys, as only administrator (keeper) should be allowed to do that. So roquelaire’s authorized_keys file should be kept for example in /home/keeper/.ssh-roquelaire and owned by keeper user. In that case, of course, keeper home folder should not be available to roquelaire:

Then for SSH access to work, the following needs to be added to /etc/ssh/sshd_config:

And the /usr/local/bin/get_roquelaire_keys script does the following:

The database repository lives in /home/roquelaire/passwds:

After you commit first version of the database file to it, the resulting structure will look like this:

As it’s a bare repository, the database file isn’t really in a downloadable form here. To clone the repository, team members need to generate an SSH key pair on their machine:

Ideally, the e-mails need to be correct and unique per user, so it’s a good idea for administrator to ensure that before adding a new key.

Once the key pair is generated, user gives his public key to administrator, and administrator then adds it to /home/keeper/.ssh-roquelaire/authorized_keys file on the server.

Users, in turn, add a new record into their local ~/.ssh/config:

Having established SSH access to the server, users can now clone the repository:

If you are confused about how that works, remember that Git repository path on server is /home/roquelaire/passwds, and so passwds is indeed a top-level folder in the roquelaire user home directory.

Now the /path/to/passwds/passwords.kdbx file in user’s local repository is the actual database he can work with.

Once users clone the main repository to their machines, getting updates and making changes becomes a familiar task of working with a Git repository.

When it comes to mobile clients, everyone can distribute their local copy of the database to their mobile devices, but since there is rarely a Git client on those, especially on iOS, one might have to use a cloud provider (iCloud Drive, OneDrive, Dropbox, etc) for syncing the database across his devices. It is not recommended (no 3rd-party servers should be involved), but it’s more or less tolerable, as long as the key file isn’t uploaded to the cloud storage together with the database.

As with any other Git repository, when someone has some changes to make in the database file, he just adds them into his local copy and commits/pushes it to the main repository.

In ideal world everyone would write meaningful commit messages, so others would know what exactly has changed in the database.

In a super ideal world everyone would also sign their commits.

One way how users can know about updates in the database is, as with any other Git repository, by fetching them from the main repository and looking at the log/history.

Another way to let users know about updates would be to create an RSS feed, using Git post-update hook in /home/roquelaire/passwds/hooks/post-update:

Now users can subscribe to the feed in their RSS clients: 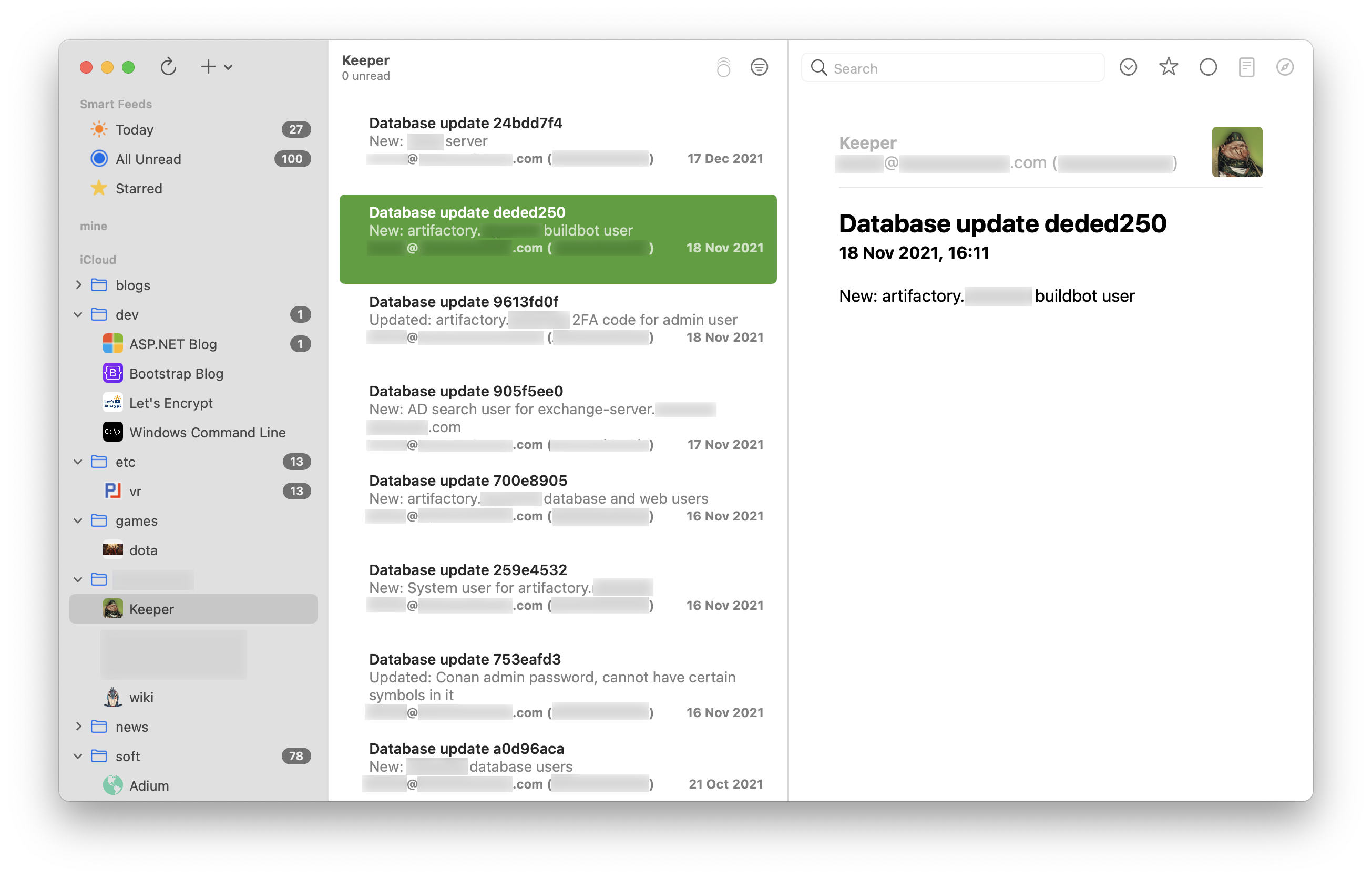 Everything seems to work quite good:

What’s not so good

There are certain disadvantages too:

That’s quite a lot of disadvantages, actually. So we will keep looking for a better solution, but like I said in the beginning, so far KeePass seems to be the best one available, given the requirements that we have. At the very least, it’s better than nothing.

devopslinux
Note that even if you sign-in with your e-mail or GitHub, you still won't be subscribed to replies. That is by design of remark42, unfortunately. To get updates about new replies/commends you need to explicitly subscribe to them either via e-mail or RSS.