I’ll talk about how to install Kodi on Apple TV and how to create a network media storage for it.

Given its price, one would think that Apple TV should be able to do a lot of things and to have great media capabilities.

In reality, Apple TV as a media box is pretty much useless on its own. If you are not subscribed to the whole bazillion of TV services (Netflix, HBO, Hulu and many many more), then you will always be missing something (quite a lot of something), as TV shows are heavily scattered across TV providers and none has them all. It is fair to say that without subscriptions Apple TV is merely just an AirPlay host.

Certainly, you can buy or rent TV shows or movies in iTunes Store, but that will cost you a fortune, so it’s not really an option.

The conclusion here is that you need a proper video player - the one that could simply play your video files from wherever they are.

But that’s not all: Apple TV has a very limited internal storage. Basically, you won’t be able to store your movies and TV shows collection on it. Well, Raspberry’s case is even worse in that regard, but hear this - Apple TV does not support connecting external disk drives! And that means that the only option would be to set-up a network share, and play your videos from there.

The fuck then would you buy Apple TV for

So, what is the point in getting Apple TV at all? There is actually a couple of reasons.

First of all, it is actually quite a powerful device in terms of hardware, plus it has a very nice GUI and an unusual remote control (a bit retarded, but also nice).

AirPlay is also a quite nice thing to have, because the majority of devices and computers in the house are from Apple.

But mostly I got Apple TV kinda “for the future”: till the times I’ll have a 4K HDR Dolby Atmos telly, and also hoping that there will be finally a single streaming service containing all the movies and TV shows from all the networks - something I would gladly pay for.

Meanwhile, let’s try to make Apple TV to be more useful with what we have nowadays.

I reused the same Raspberry Pi device (the one that was my media player before) as the server. Since I’ve had it with all the limitations of LibreELEC, I formatted the card and put there Raspbian instead. And as the purpose of the device is just to share files from the connected external disk over the network, there was no point in having a desktop environment, so I took Raspbian Buster Lite.

I have an external disk drive, where I store my movies and TV shows collection plus downloads, and I wanted to use this disk as the main storage for Raspberry device.

For that it needs to auto-mount every time the device reboots and also it needs to mount to the same path. In order to do that, first you need to find its label (or UUID):

Create a mounting folder (it will also be your share):

Values uid and gid stand for user and group IDs - who will have access to the mounted path. By default, in Raspbian your user (pi) has ID = 1000 for both itself and its group. You can check that with the following command:

Also, as you can see, my disk is formatted to exFAT, so I needed to install these as well:

Now the disk will be mounted automatically every time the system starts.

What file sharing service/protocol to use?

For many years I was stumbling upon DLNA being mentioned here and there, implying that it is a widely known and adopted media sharing standard, so I thought it’s a good time to finally try it. I installed MiniDNLA, but to my surprise it did not get discovered by neither of media players (I tried Kodi, VLC and others).

Having wasted some time on trying to make it announce itself in a way someone would finally discover it, I got a seditious idea to just try SMB.

And you know what? It just worked - the share immediately became discoverable from anywhere. So much for the media “standards”.

Why didn’t I use SFTP and went with Samba? Because I wanted to have SSH passwords disabled on my file server and allow connecting with SSH keys only, and Kodi on Apple TV sadly cannot use SSH keys (or I didn’t find a way).

What I didn’t know is that it is possible to enable using SSH password just for one user.

So when suddenly Kodi (and VLC too) stopped connecting to my Samba share (could recent tvOS update be the reason?), I just enabled SSH password for pi user:

and then added my file server to Kodi with SFTP.

The pi user here might seem not the best example, but actually later I’ve replaced Raspberry Pi with a proper PC and desktop Ubuntu, and there pi user was created with very limited rights.

By the way, my seedbox also allows connecting to it via SFTP, so now I don’t even need to download files to my local server (though I’ll still talk about it below).

Okay, you can share existing files from the disk, but how to put new files to the disk?

If you are from a country that doesn’t care much about you stealing media content via torrents, then I guess you can just install a torrent client (although I would first think about your disk resource first). And if you are from a Germany-like country, then most likely you are using a seedbox and are downloading files from it via SFTP/FTPS.

It definitely would, if only there was some remote GUI for that, because doing this via CLI is not so convenient.

And there is at least one such tool - rclone. It’s great for transferring files, and also it has a web-based GUI, so you can control it from your computer remotely, while all the downloads will happen directly on Raspberry.

Install rclone and config it with two remotes: one for your actual source of downloads (a seedbox, some server, some cloud storage, whatever) and another for your external disk. Here’s my config, for example:

The reason you need to add the disk as a remote is that without it rclone will map / path to /home/pi/, so downloads will go to SD card instead of the disk. I have no idea why is that.

Here’s how to launch rclone with web GUI:

To generate /home/pi/.htpasswd, install apache2-utils and provide a password of your choice:

Now open http://PASPBERRY-IP-ADDRESS:8998 in your browser, enter login/password and here’s what you should see in the files explorer: 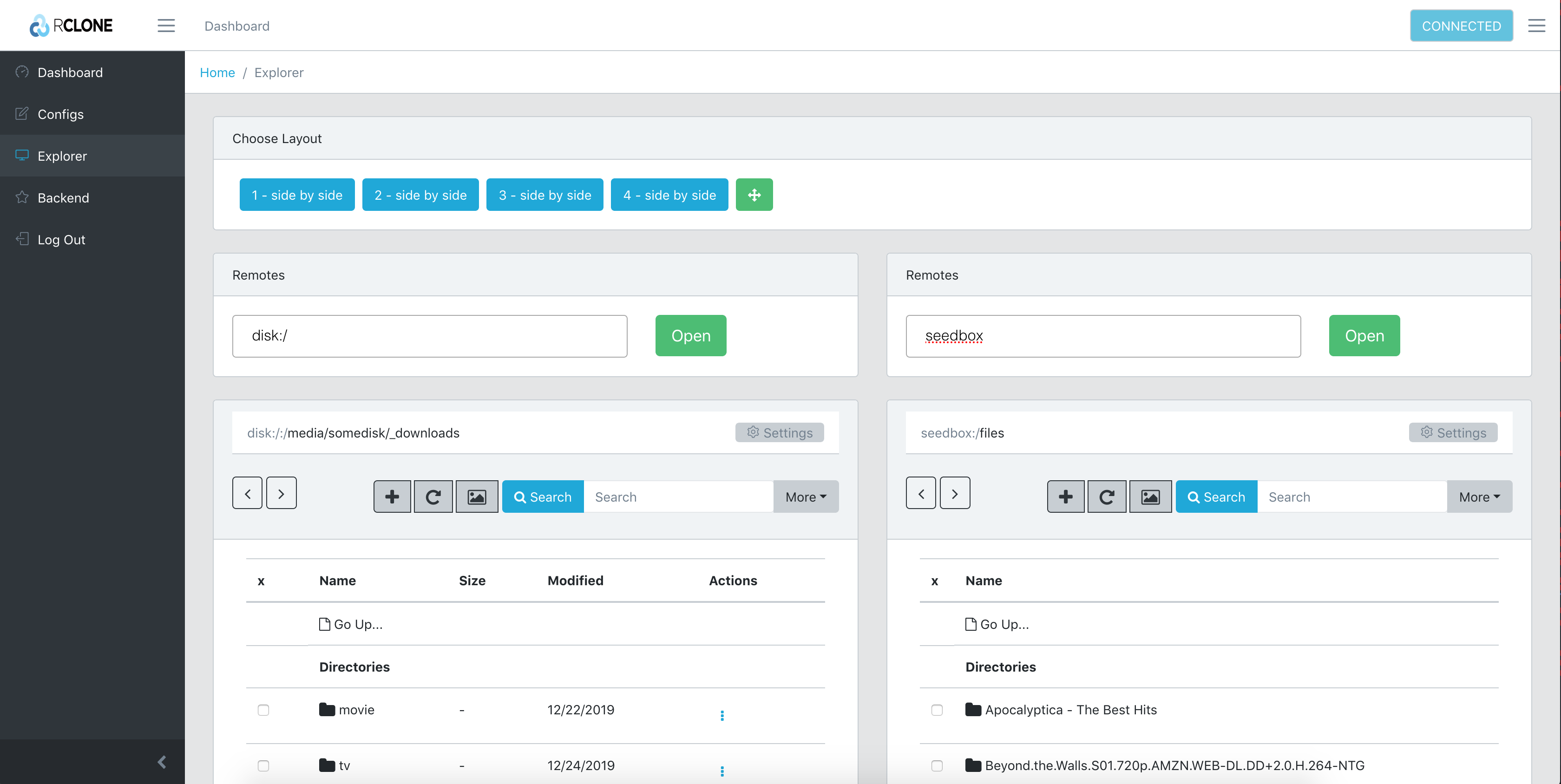 To start a download just drag and drop files/folders from the remote to your disk.

Works fine, however there are some pretty annoying issues:

Hopefully, those will be fixed eventually, especially given that the whole project started not that long ago. Meanwhile, I’ve created my own web-interface for the task (I’ll write a separate post about it some time later).

Another more serous issue with rclone itself is that the download speed endlessly decreases right from the download start till it reaches some ridiculously low values, while the actual download never progresses past a couple of megabytes. Apparently, it has something to do with relatively recent changes regarding threads, because providing --multi-thread-streams 1 option solves the issue.

One last step is to create a systemd service for rclone running with web GUI:

There is at least a couple of promising media players in the App Store, but they cost around 10 USD per year (or 60 USD for a lifetime license), which is a rip-off.

There is also VLC, and it is available for free, however I don’t like its GUI and media capabilities (from my experience with its desktop version). Although, to be fair, VLC can actually serve the purpose, because it supports reading files from network share plus it provides its own service for uploading videos from computer.

But why bother with all that when there is Kodi - the best thing to have as a media player on a TV box.

Unfortunately, it is not available in App Store. Fortunately, you can install it on Apple TV yourself. It’s the same thing as with iOS devices - as a developer you can install anything you want on your device (goes without saying that you’ll need a Mac for that).

Here’s the instruction with all the details, and here I’ll only list a short version of the process:

And it’s all good, except for one sad little detail - basic (unpaid) Apple Developer account allows you to create provisioning profiles that are valid for only 7 days, so you’ll have to repeat steps 3 (just open the same project and check the provisioning profile), 6 and 7 every week. When I get annoyed enough, I’ll try to find a way to automate that.

How to upload an application to Apple TV

Open Devices and Simulators in Xcode. If your Apple TV has a cable connection, everything should be straightforward for you, but in my case it is an Apple TV 4K version, so the only way to connect to it is wirelessly.

To make an Apple TV discoverable, open Remote App and Devices in its Settings: 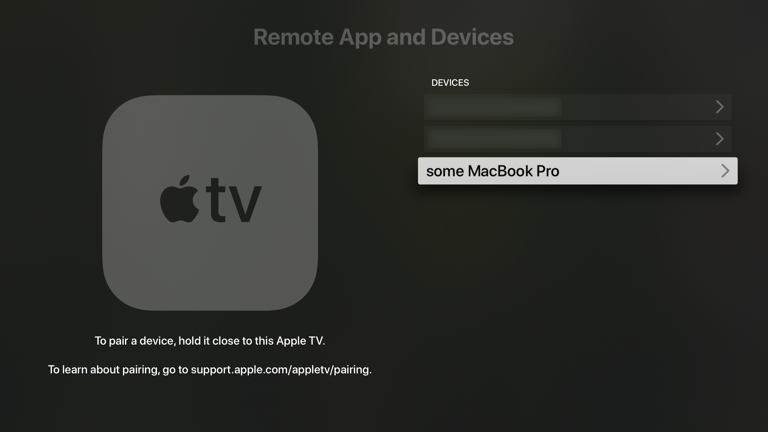 Then you should be able to initiate the pairing process from Xcode. After it’s paired, just click on + button in the Installed apps section and upload the .ipa file to Apple TV: 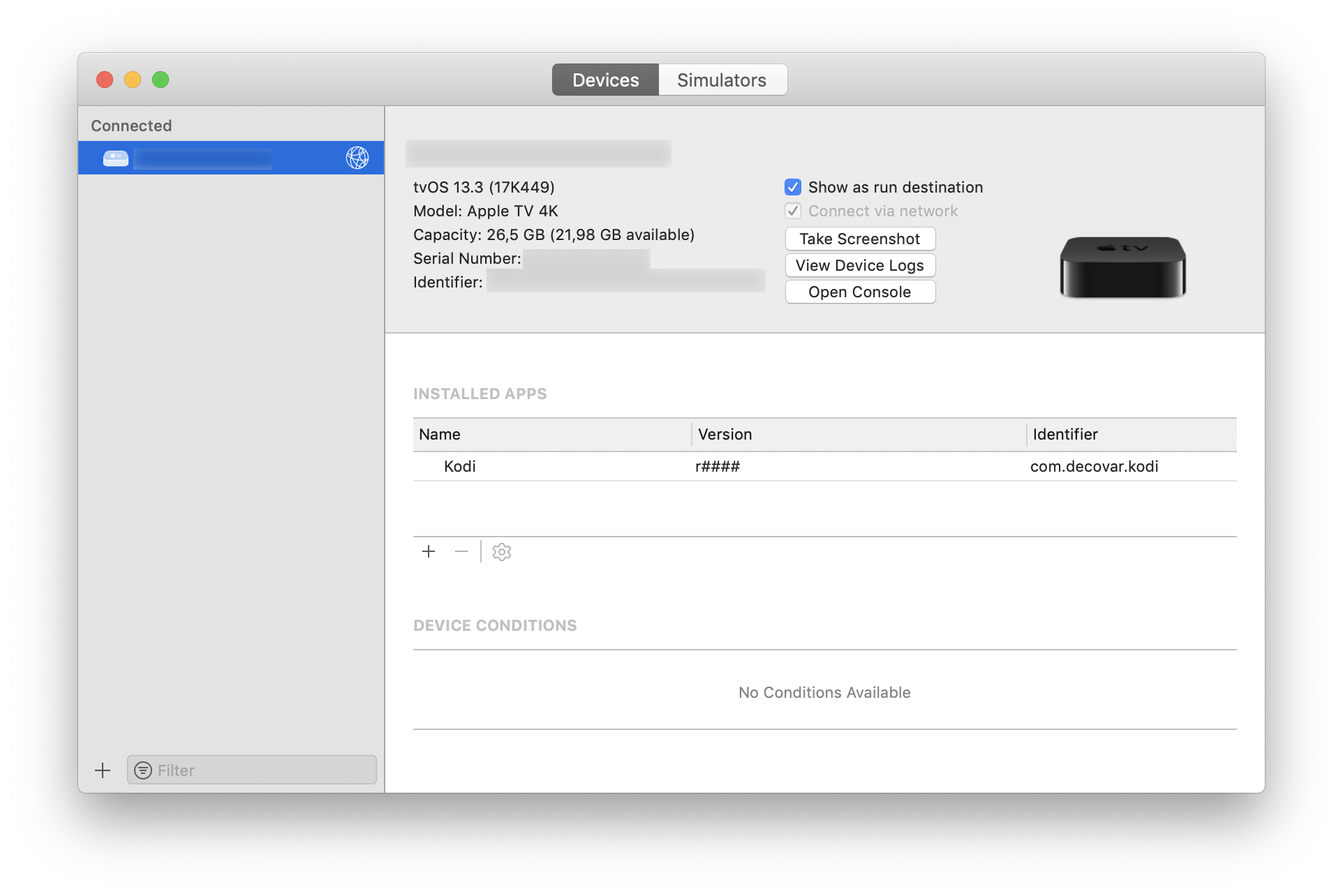 After that Kodi application should appear on your Apple TV: 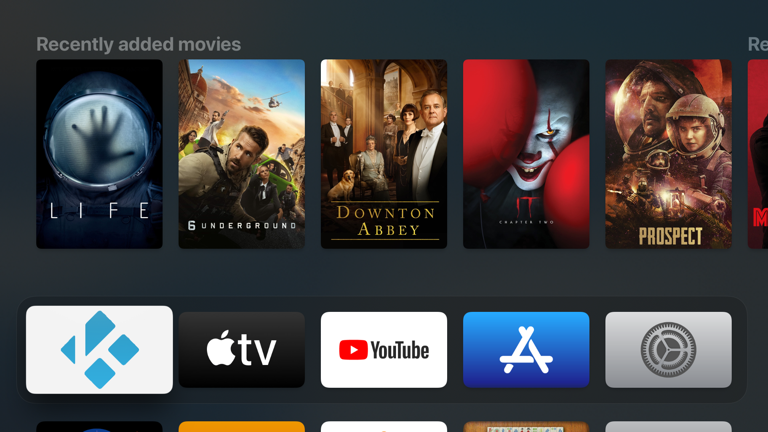 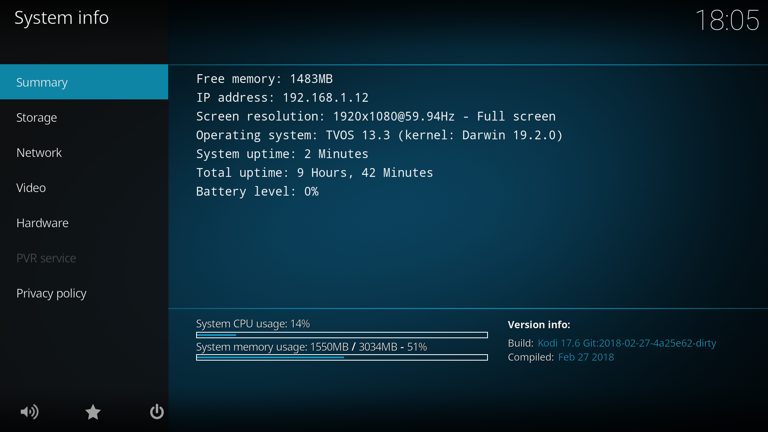 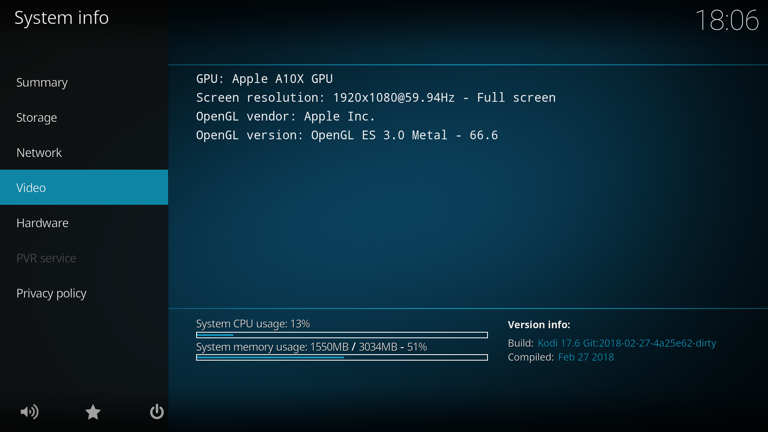 Finally, everything is ready to work together. 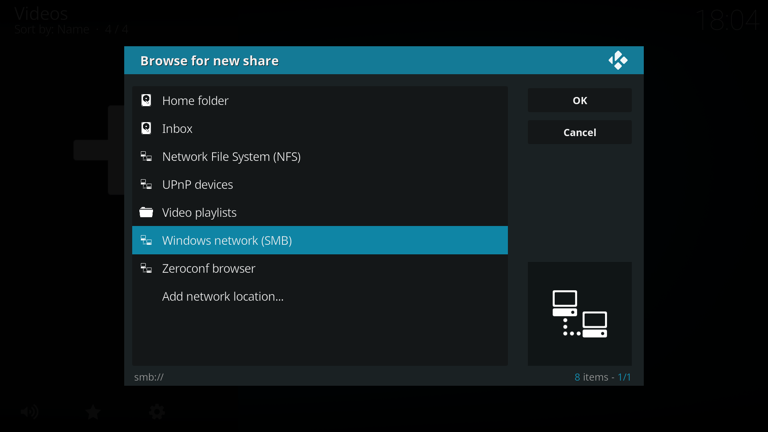 Choose WORKGROUP and it will discover your Raspberry share automatically. Choose a folder and add it as a source: 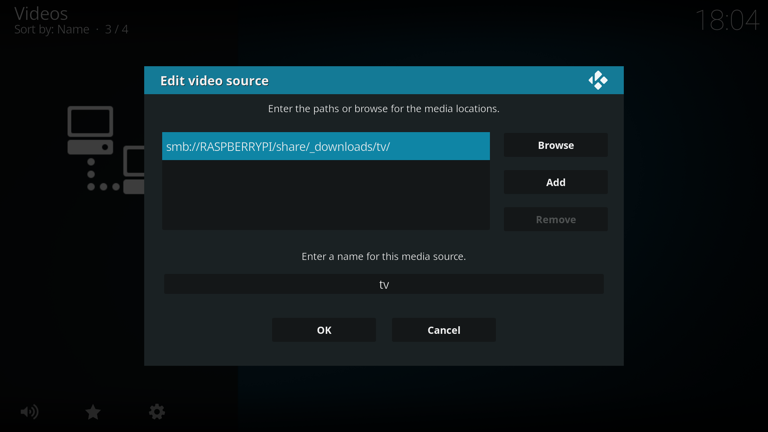 Now you’ll be able to navigate it like a local filesystem and open any video file you put there.

Kodi 19 for tvOS was announced at the official Kodi website, so I went and installed the latest kodi-20200316-b31d8bf0-depends-libnfs-tvos.deb (it is uploaded to the same folder).

…And rolled back to the old one because of the following issues with the new one:

I saw that there are a lot of new releases available and decided to try the latest. I tried the following 3 (so you can already tell that it didn’t go well):

This time they did not ruin my settings, so that’s already some progress, however all 3 had these issues:

Needless to say, reverting back to the reliable kodi-20180227-4a25e62-yab-tvos.deb made things right again.

I gave new versions another chance, now I tried these ones:

linuxapplemacostvospiracy
Note that even if you sign-in with your e-mail or GitHub, you still won't be subscribed to replies. That is by design of remark42, unfortunately. To get updates about new replies/commends you need to explicitly subscribe to them either via e-mail or RSS.